From Highland To The Highlands: A Four-Week Medical Elective In Papua New Guinea. By Guest Blogger – Daniel Mantuani

From Highland to Highlands

In January, 2011, I had the opportunity to spend a four-week medical elective at Immanuel Lutheran Rural Hospital located in Enga Province in the Highlands of Papua New Guinea.  I am a 4th-year Resident in Emergency Medicine from Highland Hospital in Oakland, California, a large-volume urban trauma center that primarily cares for the uninsured, with over 70,000 patient visits annually, but I have a profound interest in global health and tropical medicine, and I had been trying to get to Papua New Guinea for several years.  Finally, through a very roundabout manner, I was connected with Dr. Rodney Itaki, who graciously helped me arrange this elective.

Immanuel Rural District Hospital is the primary medical center for the district of Wapenamenda and is run by the charismatic, dedicated, and highly talented Dr. Raymond Saulep, who is trained in the specialty of Rural Medicine. For my own career I had chosen a residency in Emergency Medicine because it is a broad-based specialty that manages all kinds of patients. In the U.S. physicians have become increasingly sub-specialized: Internal Medicine doctors never practice pediatrics and sometimes consult a Gynecologist to perform their pelvic exams, and some surgeons are so specialized that they only perform one operation, such as hernia repair. Rural medicine in PNG could not be any further from this scenario. Dr. Saulep alone manages an HIV clinic, basic ambulatory medicine, in-patient medicine wards, OB-Gyn, trauma, and general surgery. In most rural hospitals in the U.S., complex/critically ill patients are stabilized and rapidly transferred by ambulance or helicopter to urban tertiary referral centers to be managed by a team of intensivists. In rural PNG, there are no such options:when a patient with a closed head injury presents with a blown and fixed pupil, the local physicians must themselves drill the burr holes to drain the hematoma and manage the follow-up care.

The pathology I witnessed in Wapenamenda was diverse and mostly different from what I typically see in Oakland, California. At my home hospital, trauma mainly consists of motor vehicle accidents, assaults, and gunshot wounds (GSWs). In PNG, the trauma I saw usually consisted of injuries from falls from a tree or the back of a truck, burns, or bush-knife wounds (common enough to be documented as BKWs in the patient charts).  Tribal and interfamily fights are unfortunately present and can affect access to healthcare. One day, we visited a health clinic at a nearby village only a few kilometers away. We found a toddler who had developed an enormous tumor erupting from his head over three months, likely a treatable Burkitt’s lymphoma.  In the aftermath of a tribal murder one-year prior that had not yet been settled, the villagers did not feel safe coming to the hospital. We helped arrange transfer to Mt. Hagen where they are able to perform some chemotherapy treatments. Diarrheal diseases are also common, with many children requiring IV fluids, and I was saddened to see fatal pediatric cases of bacterial meningitis, which has become increasingly rare in the U.S thanks to the high rate of vaccination against both H. influenza and pneumococcal meningitis here. At home, osteomyelitis typically occurs in the setting of complicated diabetic foot wounds, but I observed a few cases of chronic osteomyelitis and spontaneous pyomyositis in otherwise healthy children who had no history of trauma.

Despite it’s remoteness, PNG has not only not been spared the AIDS epidemic, but it has the highest infection rate in the Pacific. I saw disturbing numbers of both newly infected patients and those presenting in end-stage illness. Immanuel Lutheran Rural Hospital has a new STD/HIV clinic that screens for HIV and provides ARVs, but unless a significant public health campaign is undertaken to changelocal behaviors, the Highlands could face the same fate of many African countries.

I was also surprised to see several middle-aged patients seropositive for hepatitis B presenting with jaundice and presumed hepatocellular carcinoma on bedside ultrasound. Hepatitis B is a blood-born pathogen that can be transmitted from mother to newborn during childbirth, through sexual contact, or by exposure to infected needles. Chronic infections can increase the risk of developing cirrhosis and hepatocellular carcinoma. At Highland hospital we see higher rates of hepatitis B and C among those patients who use intravenous drugs as well as in immigrants from Asia and the Pacific where it is usually transmitted during childbirth. In the U.S, the hepatitis B vaccine is given at birth to prevent this vertical transmission, and the disease can theoretically be eradicated like smallpox.  Certain diseases that I encounter daily at home, such as poorly controlled hypertension, obesity, diabetes, alcoholism, and substance abuse, were nearly absent in Wapenamenda.

Another challenge to practicing medicine in rural Papua New Guinea is the scarcity of diagnostic laboratory tests and imaging.  Immanuel Lutheran Rural Hospital has a laboratory capable of basic tests, an X-ray machine, and an older-model ultrasound machine. Because the cost for medical care is a significant burden, tests are ordered sparingly. The only CT scanner is in Port Morseby – a one to two hour drive to Mt Hagen and thena plane ride away. In the U.S, both laboratory and imaging tests are so widely used that many young doctors who rely upon them for diagnosis are no longer proficient in many aspects of the physical exam. While many elaborate and expensive imaging systems are far beyond the reach, ultrasound has great potential in rural medicine in Papua New Guinea. 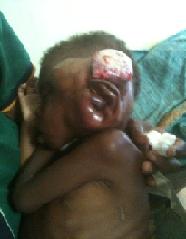 Over the past decade, ultrasound, which has been widely incorporated into emergency medicine training and practice in the U.S., provides immediate answers to certain diagnostic questions and can be repeated when clinical conditions change.  It is non-radiating, and it improves the safety and efficacy of many invasive procedures, such as thoracentesis and regional nerve blocks.  Once the device has been purchased, anultrasound machine requires only small amounts of electricity to run, and batteries may last several hours before needing to be recharged. In addition, newer models are portable and compact, ranging in size of a laptop computer down to the size of a smartphone. Originally used primarily in obstetrics, bedside ultrasound is now used to assess basic cardiac function and to diagnose hydronephrosis and renal abscesses, cholecystitis, gallstones, liver masses, retinal detachment and lens dislocation, abdominal aortic aneurisms, deep vein thrombosis, testicular torsion, ascites, and more. In the setting of trauma, a FAST exam (Focused Assessment with Sonography for Trauma) can be performed in less than one minute. Itis highly sensitive for picking up free fluid in the abdomen, the presence or absence of pericardial effusions, and both pneumothorax and hemothorax. andgreatly helps the physician decide if further invasive interventions are needed immediately.  Most importantly, bedside ultrasound is not that difficult to learn when appropriately taught. During my month at ILRH, we used their ultrasound machine extensively, demonstrating new applications and helping diagnosis in cases where the disease process was uncertain. By scanning many patients together, Dr. Saulep rapidly picked up new sonographic skills, while the medical officers and severalnurses were quickly able to recognize basic anatomy and pathology on the screen. In one case, an elderly woman was admitted overnight for progressive shortness of breath. She was afebrile, had a mild non-productive cough, diffuse coarse breath sounds on auscultation, and mild bilateral lower extremity edema suggesting congestive heart failure. Our bedside ultrasound, however, demonstrated that she had normal cardiac function, and her right lung scan showed a consolidation pattern described as “hepatization” found in pneumonia. She was started on antibiotics and the next day when x-ray was available, her films showed a right-sided infiltrate, confirming the diagnosis.  Ultimately, she improved and was able to be discharged home.

Rural medicine in a resource-poor country like Papua New Guinea is especially challenging. Coming from a county hospital with limited resources where we take pride in our ability to improvise, I was greatly impressed by the ingenuity and resourcefulness of Dr. Saulep and the medical officers at Immanuel Lutheran Rural Hospital. Infectious disease and trauma are much more common than are the lifestyle diseases such as obesity, hypertension, diabetes, and substance abuse that make up a sizable portion of the disease burden in the United States. During my five weeks in Enga, I was overwhelmed by the friendliness and hospitality I received by the hospital staff and the local community.  I would like to thank Dr. Itaki for helping me arrange this logistically difficult elective and Dr. Saulep for sharing both his medical knowledge and introducing me to the rich culture of Papua New Guinea and the Highlands. To those with interests in global health, I cannot more highly recommend experiencing rural medicine the Highlands of Papua New Guinea.

6 Responses to From Highland To The Highlands: A Four-Week Medical Elective In Papua New Guinea. By Guest Blogger – Daniel Mantuani